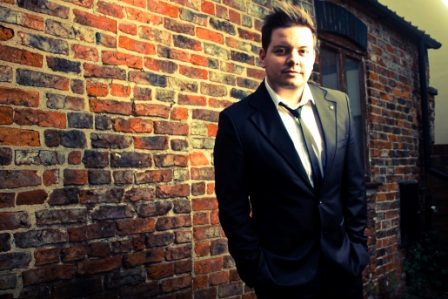 This month our featured wedding professional is Mark Gilroy, a singer and musician providing live entertainment for weddings, parties and all kinds of other events. Mark also works as a session vocalist for various recording studios.

I actually started performing when I was just 11. A junior school band was formed and we performed the Guns N Roses classic ‘Sweet Child Of Mine’ with me on keyboards. Although I’ve played since I was a youngster, I only really started incorporating singing into my music when I was around 16-17. My voice has changed a lot over the years. I used to have a very clear, clean voice like a choirboy, whereas now it’s much deeper and richer – which allows me to tap into soul and rock genres that I could never touch before. Equally, there a some songs that I simply can’t sing anymore – it’s a little bizarre to have a business where you have to adapt according to where your voice is strongest. In effect, my voice is half of my product.

I was working as a waiter in a hotel in Sheffield, and one Saturday night the resident pianist didn’t turn up. I offered to step-in and came back with my piano and a microphone, played a couple of sets and subsequently ended-up performing there for the next two years! After I moved to York to study at university, I started playing in some of the larger hotels, and before long I found that I was getting emails and calls enquiring about private bookings. Now I mainly perform for private events and weddings, as well working as a session recording artist.

3.    Why did you choose this particular business?

It’s very simple really – I love music. I love listening to and creating music, I love sharing new music with people, and I also love performing. It’s so cool to be able to watch the atmosphere in a room lift, simply by filling it with a voice and an instrument. One of my favourite things during a gig is looking around during the first few bars of a song to see how many people inadvertently start tapping their feet or mouthing along to the lyrics.
4.    Do you value social media?

I love social media and especially Twitter, so my day often starts having a quick scan through my Twitter feed and checking my favourite blogs. There’s a common misconception that Twitter is something you have to be on all day, everyday to get anything out of it, but it doesn’t take a lot of effort to engage your target audience. I now frequently get enquiries via Facebook and Twitter, as well as clients posting messages/reviews/photos on my pages. It’s a great way of generating and leveraging trust in your business.

It’s really hard to choose – I’ve played at some incredible venues over the last decade, and there have been many highlights along the way. If I had to choose it would probably be a wedding that I performed for in Wales last year. The bride and groom had asked me to perform a special version of the 80s power ballad ‘Total Eclipse Of The Heart’ – as I played the first few bars, every single person in the room rushed to the dance-floor, formed a huge circle around the couple, and raised the roof singing along with me. It was so much fun and a real magical moment.

Ask any musician and I’m sure they’d tell you that the worst part of the job is when you feel invisible. I’ve spent many long nights singing my heart out in bars and hotels with just a handful of people to play to. Worse still, competing with holding an audience’s attention while a big sporting event is being shown on the television is no fun at all.

7.    Anything you wish you had known when you started?

It’s taken over a decade of performing to learn that there are certain songs that can instantly transform a group from laid-back to party-mode. I’ve tested this out with many, many groups of all ages and I’ve narrowed it down to a golden list of around 10 songs, which I’m keeping as a closely-guarded secret. It’s a great comfort to know that if a gig isn’t quite going the way I hoped, I can throw in one of these songs and straight away we’re back on track!

I think that my biggest challenge is managing people’s perceptions of me, in order to stay relevant. When you hear ‘wedding singer’ most people immediately think of a guy in a bad suit telling terrible jokes and crooning away to three hours worth of Sinatra covers. That is something I never want to become – so I go out of my way to perform fairly unorthodox covers of songs where possible. Having a keyboard rather than a piano certainly helps with versatility – at a click of a button you can jump into a saxophone segway, or even have a full rock band backing you up as you fly into a lead guitar solo.

9.    Do you have a top tip for someone starting out in the wedding business?

Don’t be scared to say no. With the economic climate as it is, it’s very easy to put yourself in a situation where you take on so much work that you can’t do it all justice, or perhaps where you’ve been talked-into offering an unfairly discounted price. As long as you can keep people talking positively about your business, your next client will be just around the corner.